As Featured In Forbes: ‘If I Don’t Do Social Media, Can My Public Relations Still Succeed?’

As Featured In Forbes: ‘If I Don’t Do Social Media, Can My Public Relations Still Succeed?’

Here’s a question I hear most frequently from entrepreneurs who are 40 and older, but it applies to many others as well. Some people don’t prefer to be present on social media, or even resent the time and imposition on privacy.

Perhaps it even feels inauthentic (the “isn’t my life wonderful” implications can make others feel needlessly inferior), or like an unneeded burden to respond to people you really don’t know. Can their businesses succeed without it? And what about their PR? This was one of the things I discussed this week with Ron Klein, the 81 year old (“Make that 18. I’m dyslexic”) entrepreneur who is often lauded in the press as “The Grandfather of Possibilities.” Klein is responsible for innovations including the invention of the Magnetic Card Strip that has made the credit card industry possible as we know it today.

In the 1970s, when he happened upon a deal to obtain special teletype machines from Western Union, Ron was able to use the equipment to provide trading floor expansion and maintenance for the NYSE. He continued to provide enhancements to help automate the NYSE. In 1983 he developed a system to provide up to the minute bond quotation and trade information. He had each bond trader pay him $10,000 to join his bond trading market and $300 a month for the use of his $100 box. He developed the MLS (Multiple Listing Service) for the real estate industry and voice response capability for the banking industry. 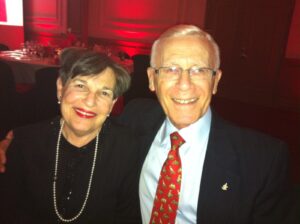 Arlene Klein, author and publicist and Ron Klein the “Grandfather of Possibilities” (Image courtesy of Ron and Arlene Klein)

In all, Ron has attempted to retire three times, beginning with “a nice buyout” of his first company of 125 employees that he had taken public at age 34. (“I fished for three months. That
was enough.”) In 2011, Klein was brought back out of retirement for the third time by an invitation from Greg Reid, the author and speaker behind the Secret Knock conference and KeynoteSpeaker.tv, to join the Think and Grow Rich “Stickability” book project and to get into the circuit of activities that now allow him to spend his time speaking and inspiring younger entrepreneurs.

Though he never aspired to traditional public relations, Klein frequently appears in the press. He’s been featured in Huffington Post’s Innovation and Influencer series. He was the
focus of a recent installment on Henry Ford’s Innovation Nation with Mo Rocca on CBS. This week, he’s present in a video interview for Inc on the importance of protecting your Intellectual Property (IP).

So how do you get this kind of press if you don’t have a PR agency and you prefer to eschew social media? Says Klein in our interview, he has three simple guidelines for life and business that also apply to PR: Be Smart, Daring and Different. These are the principles he presents in speeches and teaching. For himself, getting involved in social media would be out of alignment with his “smart, daring and different” ideal. It’s not that he doesn’t like social media, he is quick to stress, it’s that he has specific ideas about social media
that would make it inadvisable for the use of his time.

In Klein’s opinion, social media’s best use in a business is as after a person or a company has achieved credibility, as a means of making the world aware “you’re still there.” For Klein, credibility was the natural outgrowth of his accomplishments—when your powers of observation lead to something as profound as the
magnetic card reader strip or automating the trading floor of the NYSE, people tend to look him up and find him readily to get him into the press. Being present on social media, for him, reminds people of the principles he teaches, such as “Pay attention. Don’t start in the middle— identify the ‘given,’ the goal and then travel
through your journey. You find the gift behind every opportunity and then you move on.” 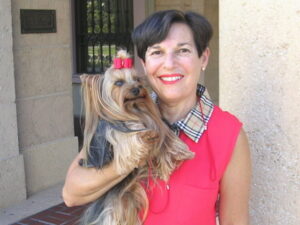 In Ron’s observation, short of specialized programs for selling through mechanisms such as Facebook ads, social media is an inefficient vehicle for accomplishing sales. As a PR lesson to others, however, another important part of Ron Klein’s executive story is the benefit he gains from his wife and partner, Arlene. Arlene is a human keg of dynamite who stands 4’7” (“I used to be 4’10”. I contracted.”) She is the author of the book about Ron, “The Grandfather of Possibilities” and a second more recent book about working through the grief of losing a beloved pet, “I Never Wanted to Say Goodbye.”

Married for 57 years this September, Ron and Arlene have a son and a daughter (ages 55 and 52) and four grandchildren, ranging in age from 25 to 14. Arlene has been by Ron’s side through every innovation and every step of the way. As press opportunities emerge, it is Arlene who seizes the opportunities (or initiates them) and follows the PR process through. When Ron appears in the press, the entrepreneurship community is aware because of Arlene’s social preparation—a reporter had followed Ron for several days to ask a myriad of questions—but for the actual taping, producers simply asked Arlene to tape Ron speaking his answers about the interview topics from her phone. “Have him answer the questions as if he’s responding directly to Mo,” they said. So he did, and she did, and the footage that resulted from a
simple cellphone recording are now immortalized in the segment that appeared on CBS.

Even if you don’t do social media, you can’t afford to ignore it. One of the reasons Ron Klein has been as successful as he’s been in securing his own public relations is that Arlene has handled the communications to social media on his behalf. For others, the lesson in his may be that you can gain many of the benefits of social media as long as someone close to you—and someone who is willing to genuinely engage—is willing and able to tap the power of social media on your behalf. In my own opinion, this approach
can be very effective; however, having someone communicate on social media in your voice, as a ghostwriter “proxy” is much less ideal. While some executives do this, those who are successful in building their community and following on social media are those who are willing to discuss their ideas, respond to followers, and to genuinely engage as opposed to using the medium as a megaphone to announce their good
news to the world.

Credibility First; Social Media later. Ron’s point about gaining credibility first before seeking visibility through social media is well taken. For him it has been a winning strategy as the notoriety of the things he’s accomplished are fairly renowned. For a startup entrepreneur, however, I would maintain that providing value-add through social media articles and postings is some of the way emerging entrepreneurs can
break onto the scene.

As a final note, I give kudos to both Ron and Arlene for the way they’ve worked hand in glove as a team. If the need for PR beyond my own efforts were ever needed, I would probably be hiring Arlene.

About the Author: Ron Klein

Ron Klein is a man who accomplishes extraordinary things. He is a PROBLEM SOLVER. Every solution has resulted in monumental change, either in a new invention or a simple solution. His innovative ideas have changed the world.

If you would like to chat with Ron for 15-20 minutes, please fill in the form below: